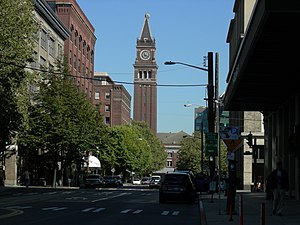 The last time Greyhound Lines had to look for a home in Seattle, Calvin Coolidge was still president. But with an eviction notice earlier this fall, the bus line will need to move from its Stewart Street location by April 2013.

As Crosscut’s C.B. Hall writes, the company says if a location can’t be found, it’ll need to leave Seattle. It’s a test, he says, to Seattle’s “commitment to mass transportation.”

Once upon a time, according to Hall’s reporting, King Street Station as intermodal hub had even more political will behind it than it has today. Former Seattle mayor Greg Nickels and former city council Transportation Chairwoman Jan Drago were strongly behind the notion several years ago. But, as Hall reports, even though the station is going through a restoration, the political landscape has changed (including more of a regional focus on the deep-bored tunnel to replace the Viaduct). Though Seattle once wanted Greyhound included in the transportation hub, it isn’t clear whether that can now work out. (The Crosscut article includes artist J.Craig Thorpe’s drawing of what a remade station with bus terminal might look like. Cascadia Center has often relied on Thorpe’s talents to help communicate complex policy issues visually.)

Comparing the opportunity for turning King Street Station into a true multimodal terminal, as has been done in Vancouver, British Columbia and Meridian, Miss., among other locations, Hall poses the only question that really matters: “Does Seattle intend to seize the opportunity?”