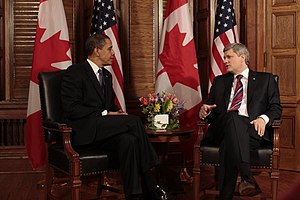 An agreement signed between the U.S. and Canada will make traveling between Vancouver, British Columbia, and Seattle, Wash., faster and more efficient.
The “Beyond the Border” accord, signed by Canadian Prime Minister Stephen Harper and U.S. President Barack Obama, includes provisions for pre-clearance. That means, among other things, that travelers heading south from Vancouver will no longer have to undergo inspections in both Vancouver and Blaine, Wash. The inspection functions will be consolidated in Vancouver.
From the Cascadia Center’s official statement in support of the accord:

By eliminating duplicative inspection functions and increasing the speed of travel between Canada and the U.S., the Beyond the Border accord serves as a long-awaited landmark agreement. … By December 2012, with pre-clearance a reality, the region will benefit from one – instead of two – inspections, meaning a faster and more efficient train travel experience. The decision is also better for the inspection officers who will be able to consolidate their efforts in Blaine, Wash., to one central location in Vancouver, British Columbia.

In conjunction with the Canada Border Services Agency’s decision in August to permanently waive the inspection fee, the Beyond the Border accord points to a brighter future for the Amtrak Cascades service.

The official statement supporting the agreement can be found here.